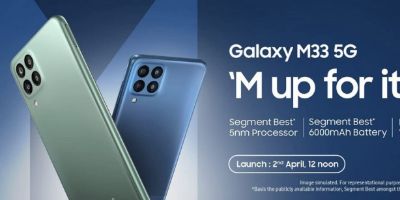 On March 26, according to GSMArena, the Samsung Galaxy M33 mobile phone, which was unveiled earlier this month, will be launched in India on April 2. It comes in three colors, but Samsung has only confirmed two for the Indian market right now - blue and green.

The Samsung Galaxy M33 5G phone is equipped with a 6.6-inch FHD+ screen and is pre-installed to run the Android 12-based One UI 4.1 system. The phone is powered by a 5nm octa-core processor, but the company did not reveal the name of the chipset. The Galaxy M33 will be available in two storage configurations in India - 6GB+128GB and 8GB+128GB.

The Samsung Galaxy M33 has five cameras - an 8-megapixel selfie camera built into the front waterdrop display, a 50-megapixel main camera on the rear, and a 5-megapixel ultra-wide, 2-megapixel macro and 2-megapixel depth cameras.

The smartphone features a side-mounted fingerprint reader and is equipped with a 6000mAh battery that supports 25W charging. However, Samsung won't include a 25W charger in the retail package, and users will have to pay extra for faster charging speeds.

The Samsung Galaxy M33 phone will be available in India through Amazon.in and the company's official website.