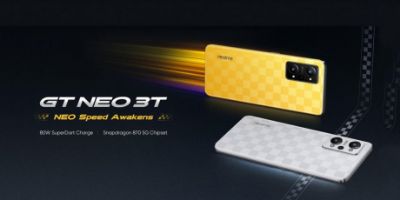 On June 7, realme released a new member of its GT series, realme GT Neo 3T, overseas today. Similar to the standard GT Neo 3, the new phone has an upgraded Snapdragon 870 chipset and a 64-megapixel main camera.

The Neo 3T still has an AMOLED display with FHD + resolution, 120Hz refresh rate and a reduced size of 6.62 inches. The phone brings a yellow or white version of the racing flag design, and a more traditional black version is also available.

The realme GT Neo 3T has a 64-megapixel main camera on the back, as well as an 8-megapixel ultra-wide-angle camera and a 2-megapixel macro camera. It is equipped with Snapdragon 870 processor, 8GB memory and 128/256GB storage, 5000mAh battery, 80 W fast charging, and real me UI 3.0 based on Android 12.