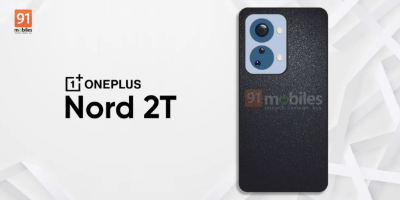 On March 11, 91mobiles has released a rendering of the OnePlus Nord 2T provided by an industry insider. There are two rings on the back of the phone, which can accommodate three lenses and dual LED flashes. The frosted back looks very textured. The Nord 2T is said to launch in April-May.

The OnePlus Nord series is steadily expanding globally and in India. The company launched the OnePlus Nord 2 in June last year, followed by the cheaper Nord CE 2 5G last month, and this new OnePlus Nord 2T will also be available for the Indian market.

The OnePlus Nord 2T has a unique back design with a sandstone finish and a unique camera module.

The camera module has a blue matte finish with two rings inside. The top ring has a sizable main camera, while the other ring houses dual cameras. There are also two LED holes next to the camera.

The source said that the front face of the OnePlus Nord 2T looks familiar, which is the very common punch hole design in the upper left corner.

OnePlus Nord 2T specs (expected)
Some of the specifications of the OnePlus Nord 2T have been leaked online, and it is said to be equipped with a 6.43-inch FHD+ AMOLED display with a punch-hole screen, 2400×1080 pixel resolution, narrow bezels and a 90Hz refresh rate.

In addition, the machine is expected to be equipped with MediaTek Dimensity 1300 chip, running Android 12 operating system, equipped with 50MP + 8MP + 2MP rear triple camera and 32MP front camera, built-in 4500mAh battery, support 80W fast charge. It is not yet known when the phone will be released, and IT Home will bring you more follow-up reports.