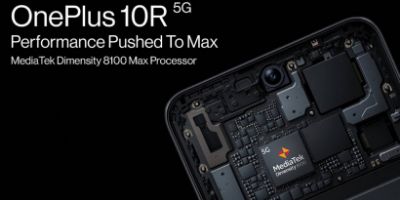 On April 16, according to Gizchina, OnePlus will launch two new smartphones in India on April 28, including the OnePlus 10R 5G and the OnePlus Nord CE 2 Lite. The OnePlus 10R rear design was suddenly revealed ahead of its official launch. OnePlus India CEO Navnit Nakra recently confirmed that the upcoming OnePlus R-series phones will feature Dimensity 8000 series processors.

In the latest press release, OnePlus revealed that the 10R 5G will come with a custom MediaTek Dimensity 8100-MAX SoC. Additionally, the company has partnered with MediaTek to ensure the processor can handle graphics-intensive games by maintaining power consumption and frame rates. In addition, the OnePlus 10R 5G will be equipped with a 4500mAh battery. The battery uses 150W SuperVOOC charging technology. According to reports, OnePlus plans to launch the OnePlus Ace phone in China on April 21, which is expected to be a variant of the OnePlus 10R.

The new SoC may have some notable changes compared to the Dimensity 8100 SoC. Plus, the phone's 150W charging technology can fully charge the phone's battery in just 17 minutes. The phone will be available in two colors. Apart from that, it shows triple cameras on the top left corner of the back. There is also an LED flash next to the rear camera. From the front, the volume buttons are on the left and the power button is on the right side of the device.