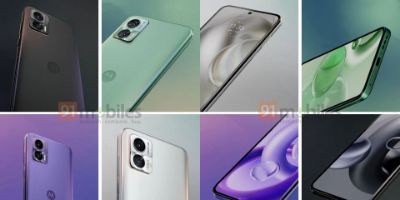 Motorola officially announced that it will hold a global conference overseas on September 8. At that time, Motorola will release the Edge 30 Ultra (renamed X30 Pro) and the razr 2022 folding screen phone. In addition, the Motorola Edge 30 Neo is also expected to be unveiled together.

As can be seen from the rendering, the Motorola Moto Edge 30 Neo will use a dual rear camera, of which the main camera is a 64-megapixel camera with optical image stabilization OIS. In addition, the machine is equipped with a centered single-hole screen, the volume key and the power key are located on the right side of the fuselage, the bottom is a USB-C interface and a SIM card slot, and there is no 3.5mm headphone jack.

According to reports, Motorola Moto Edge 30 Neo will use a 120Hz refresh rate OLED screen, equipped with a Snapdragon 695 chip, equipped with 8+256GB storage, and a built-in 4020mAh battery.

Qualcomm launched the Snapdragon 695 chip in October last year, which uses TSMC's 6nm process technology and is positioned at the mid-to-low end. The Snapdragon 695 has two A77 large cores (2.2GHz) and six A55 small cores (1.8GHz). The GPU is Adreno 619, the same as the Snapdragon 750G.