Samsung Galaxy Z Fold4/Z Flip4 and other new products release time exposure: August 10 Apple's iPad mini 7 has a 120Hz ProMotion screen, an A16 chip and 6GB or 8GB of memory 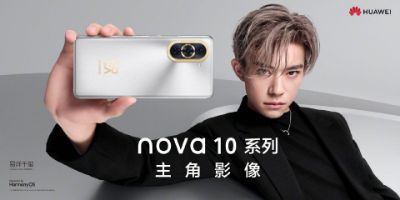 According to the report, Huawei nova 10 Pro will have a 6.78-inch curved display screen, a front perforated dual camera, a fingerprint recognition scheme under the screen, three rear cameras, and a unique rear camera arrangement.

The Huawei nova 10 Pro phone has three vertical cameras, the raised part looks very recognizable, and there is an LED flash at the bottom of the back panel, and then the brand Logo of Huawei. Specifically, the middle lens of the rear camera layout of the new machine is very unique with a special "ring", and most users will be attracted by this prominent design, giving people a sense of surprise.

The Huawei nova 10 Pro phone is said to be available in silver and black, with the silver model featuring a gold brand Logo and lens ring, which is enough to show its nobility. It is worth mentioning that the NOVA family Logo is also printed on the back of the new machine.