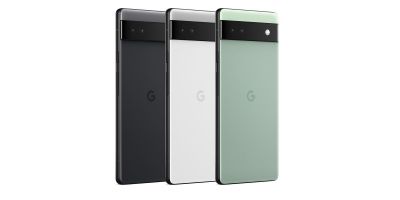 On May 12, Google officially launched the Pixel 6a at Google I/O 2022, priced at $449. The overall design is the same as the Pixel 6 series, with three colors of black, white and green. The machine was released in July, US time. Pre-orders will begin on the 21st  and will go on sale on July 28th, US time.

In terms of appearance, the Pixel 6a is roughly similar to the Pixel 6/6 Pro, with a 6.1-inch FHD+ OLED center punch screen on the front, a 60Hz refresh rate, and a 3D composite back cover and aluminum frame on the back. The back cover is different.

According to the official introduction, Pixel 6a is equipped with Google's self-developed Tensor SoC, Titan M2 security chip, and also uses 6GB LPDDR5 memory and 128GB UFS 3.1 storage, which means that Pixel 6a has the same price as Pixel 6/6 Pro at a lower price. performance experience. The Pixel 6a is also Google's first phone with an in-screen fingerprint scanner.

In addition, the Pixel 6a supports WiFi 6E, supports IP67 water resistance, and has a built-in 4,410mAh battery with 18W fast charging. Google claims up to 72 hours of use on a single charge when using Ultra Battery Saver. Google is also promising 3 years of Android updates and 5 years of security updates for the Pixel 6a. Unfortunately, the Pixel 6a is the first model in the Pixel A series to not feature a 3.5mm headphone jack.